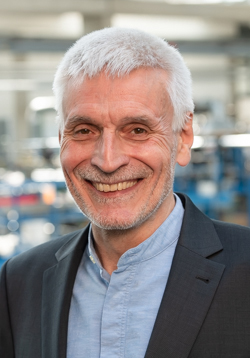 Great honour for IWT scientist Dr.-Ing. Thomas Wriedt, formerly head of the department of powder and particle measurement technology in process engineering, shortly before his retirement: He receives the Michael I. Mishchenko Medal 2021. The award honours his long-standing contribution to the field of light scattering and his exemplary achievements in the service of the community, especially with the maintenance of the DFG-funded ScattPort web portal, an information platform on the subject of light scattering.

The announcement of the $1250 prize took place at the online event of the Electromagnetic and Light Scattering Conference ELS-XIX (St. Petersburg 2021), a conference series initiated by Thomas Wriedt and Michael I. Mishchenko, among others.

In the nomination, special mention was made of his many years of work at Leibniz-IWT, which, together with his department, focused on the development of the "Null-field Method with Discrete Sources". Within an international research cooperation between the IWT, the Moscow research group around Yuri Eremin at Moscow State University and the University of Bremen, this could be compared with the "Discrete Sources Method" and further developed.

According to information in the Web of Science, Thomas Wriedt has published more than 200 papers in the course of his career and has a notable h-index of 30, which reflects his high recognition in science.

The medal is named after Michael I. Mishchenko, editor of Journal of Quantitative Spectroscopy and Radiative Transfer, who died suddenly last year.

It has been awarded annually since this year to an individual in the scientific community who has made pioneering and innovative contributions to the fields of radiative transfer, light scattering and remote sensing, and also recognises organisational commitment within the community. Nominations are managed by the editorial board and publisher of the Journal of Quantitative Spectroscopy and Radiative Transfer. The selection committee is composed of three editors-in-chief of the Elsevier journal and three distinguished members of the JQSRT community.

In his brief acceptance speech, Mr. Wriedt, who is still working part-time in chemical engineering and continues to conduct research in the field of optical particle measurement, emphasised the importance of Michael I. Mishchenko in building the community, as a further developer of the T-Matrix method, as an ELS organiser and editor. He expressed the hope that the community will succeed in honouring and continuing the work of Michael I. Mishchenko with the continuation of the ELS conference series.

The official announcement of the award can be found here.