Directorate History of the Department of Materials Engineering

The foundation stone for today's Department of Materials Engineering was laid in 1954.

On 1 August 1954, Professor Dr.-Ing. habil. Otto Schaaber was appointed as the new director of the then "Institute for Hardening Technology and Heat Treatment (IHT)" and during his more than 27 years as director he contributed significantly to building up the scientific reputation and international standing of the institute.

After studying physics in Stuttgart, Prof. Schaaber completed his doctorate in 1969 with a dissertation on "radiographic stress measurements on light metals". At the IHT, in addition to fundamental studies on the most diverse questions of heat treatment of metals, the development of new methods of thermochemical surface treatment of steels (e.g. boriding) is particularly noteworthy. Special mention should also be made of the introduction of previously unknown measuring methods such as scanning microscopy and electron beam analysis. Prof. Schaaber initiated and led the International Association for Heat Treatment for several years. He was elected by the 15th Ordinary General Assembly of the AiF on 15 November 1968 in Bad Godesberg as a substitute member of the AiF Presidium, initially for one year, and was then a member of this Presidium from 1968 to 1978. On 7 January 1969, the Executive Committee elected him from among its members as one of the two Vice-Presidents of the AiF. He held this honorary office until his retirement from the Executive Committee, i.e. for nine years from 1969 to 1978. According to the minutes of the 25th Ordinary General Assembly of the AiF in Cologne on 9 June 1978, he did not stand for re-election for health reasons. Prof. Schaaber was also the spokesman for a working group of the AiF's own research association institutes ("Otto von Guericke Institutes") from 1972 to 1975.

In addition, he made intensive efforts to promote research work, for which he was awarded honorary membership of the former German Society for Physical Metallurgy - now the German Society for Materials Science (DFM) - and the Association Technique du Traitement Thermique (ATTT), among others. Numerous publications at home and abroad testified to his extensive scientific activities, for which he was personally honoured with numerous international awards, but also for which the still young institute soon achieved world renown. Until his death, Prof. Schaaber was also co-editor of Härtereitechnische Mitteilungen (HTM), which is still published today and whose form and standard he decisively influenced.

On 1 August 1981, Prof. Dr.-Ing. habil. Peter Mayr took over the management of the Institute for Hardening Technology (IHT) in Bremen-Lesum as the successor to Prof. Otto Schaaber and held this office until 2004 - well over 20 years - with the greatest personal commitment.

After studying physics at the TH Stuttgart, Prof. Mayr went to Karlsruhe with his doctoral supervisor, Prof. Eckard Macherauch, and obtained his doctorate in 1969 in the field of the fatigue behaviour of metallic materials; in 1979 he obtained the venia legendi for the subject of materials science.

During his time at the IHT, Prof. Mayr laid the foundations for today's IWT by reforming the former Institute for Hardening Technology, developing it further with great pioneering spirit, introducing subject-specific departments in materials technology and helping it to achieve its current size and importance. At the same time, in 1981, he was appointed to the newly established Department of Materials Science in the Faculty of Production Engineering at the University of Bremen. He was particularly concerned with teaching fundamentals based on mechanisms in order to strengthen the understanding of material reactions in the manufacturing process and in use and to enable a meaningful application. In 1993, he was the first engineering science laureate of the Berninghausen Prize, which is awarded for excellent teaching and innovation at the University of Bremen.

During his tenure, formative milestones were reached, such as the conversion of the Foundation Institute for Hardening Technology into the Foundation Institute for Materials Technology (IWT) and the associated establishment of the interdisciplinary structure of the Institute, which unites the three disciplines of materials, process and production engineering, the move to the campus of the University of Bremen, the affiliation of the MPA and the initiation of the Collaborative Research Centre (SFB) 570 "Distortion Engineering - Warp Control in Manufacturing" in 2000. SFB 570 was the fifth SFB at the University of Bremen and the second initiated by the IWT.

Heat treatment remained a focus of research activities within the Department of Materials Engineering. Here it was possible to establish facilities that allow research and development work to be carried out in almost the entire field of heat treatment. The closely related field of surface technology was established and expanded during this time, so that it was possible to influence boundary layer areas from the nano to the millimetre range. In accordance with Prof. Mayr's earlier field of work, the department of structural mechanics was also established, which deals with the recording and prediction of the relationships between manufacturing and mechanical properties as well as the reliability of components. For a powerful analysis of material-technical work, it was also possible to establish the Metallographic Analysis and the Physical Analysis, which still exist in their structure today and are continuously developing in terms of content. He also expanded the field of activity of the MPA, of which Prof. Mayr was head from 1986 onwards, to include the testing of metallic materials. In addition, the new fields of analytical microscopy of building materials and microbiology were established.

With admirable personal commitment, Prof. Mayr also took on tasks in collaborative research, convinced of its necessity and its advantage for the scientific community: as a reviewer for the AiF, the AVIF, the Bavarian Research Foundation and the DFG, in the Scientific Council of the AiF and, last but not least, as chairman of the technical committees of the AWT, the indispensable basis for industrial collaborative research in the AWT. As an expert on the German research landscape, the Federal President appointed him to the Science Council in 1997 and confirmed the appointment for a second term in 2000.

Prof. Zoch studied general mechanical engineering at Darmstadt Technical University from 1974 to 1979. He then worked at FAG Kugelfischer Georg Schäfer AG Schweinfurt from 1980, from 1993 as Head of Corporate Research and Development. During this time, he completed his doctorate in 1994 as an external doctoral student at the University of Bremen under Prof. Mayr with a thesis on the influence of the solidification geometry of continuous casting on the distortion behaviour of ring-shaped components made of the rolling bearing steel 100Cr6. From 2000 to 2004, Prof. Zoch was managing director of Neue Materialien Bayreuth GmbH, a research and development company of the Free State of Bavaria.

After taking up his post at the IWT, Prof. Zoch took on the role of spokesperson for the German Research Foundation's Collaborative Research Centre 570 "Distortion Engineering" at the University of Bremen on the basis of his expertise and successfully led this interdisciplinary collaborative research centre, which researched the causes and compensation possibilities of heat treatment distortion along the entire process chain of metallic components, until its conclusion in 2011. His other research focuses were on steel production as well as heat treatment, residual stress influence and the fatigue behaviour of high-strength steels.

Since 1991, Prof. Zoch has been a member of the board of the Arbeitsgemeinschaft Wärmebehandlung und Werkstofftechnik e.V. (AWT). (AWT) since 1991, from 2001 to 2004 on the Executive Board, during which time he played a key role in shaping the AWT. From 2004 to 2020, he also contributed his expertise to the AWT's Scientific Advisory Board. Application-oriented research within the framework of the German Federation of Industrial Research Associations "Otto von Guericke" e.V. (AiF) was of great importance to Mr. Ziegler. (AiF) has always been a particular concern of Prof. Zoch. Since 2005, his commitment has led him to various management positions at the AiF, and since 2016 to the full board of the AiF. Prof. Zoch has also significantly promoted international cooperation. From 2010 to 2011, he was President of the International Federation for Heat Treatment and Surface Engineering (IFHTSE) and organised several international conferences in this capacity.

Prof. Zoch was instrumental in initiating and shaping the entire process of IWT's admission to the Leibniz Association in cooperation with the three main departments of Materials Engineering (WT), Production Engineering (FT) and Process Engineering (VT) and later also the MPA. 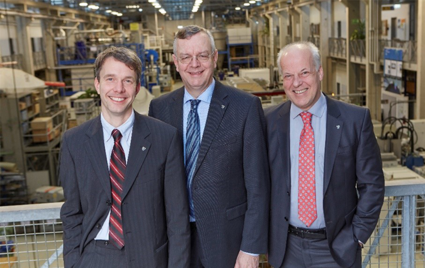 On 1 June 2020, Prof. Dr.-Ing. habil. Rainer Fechte-Heinen took office as the new Chairman of the Directorate and Head of the Department of Materials Engineering at Leibniz-IWT, the Head of MPA Bremen and the Professorship for Materials Engineering/Metals at the University of Bremen. He thus directly succeeded Prof. Zoch.

Prof. Fechte-Heinen's career began with his mechanical engineering studies with a focus on materials simulation and mechanics at the Ruhr-Universität Bochum from 2000 to 2004 and his subsequent doctorate, also at the Ruhr-Universität Bochum, from 2005 to 2007. After successfully completing his studies, he began his many years of work in materials development at thyssenkrupp Steel Europe AG, most recently as Head of Product Development: Technology and Innovation. In parallel, he worked on his habilitation in 2014 and was involved in teaching. In 2018, he was appointed honorary professor at Ruhr University Bochum.